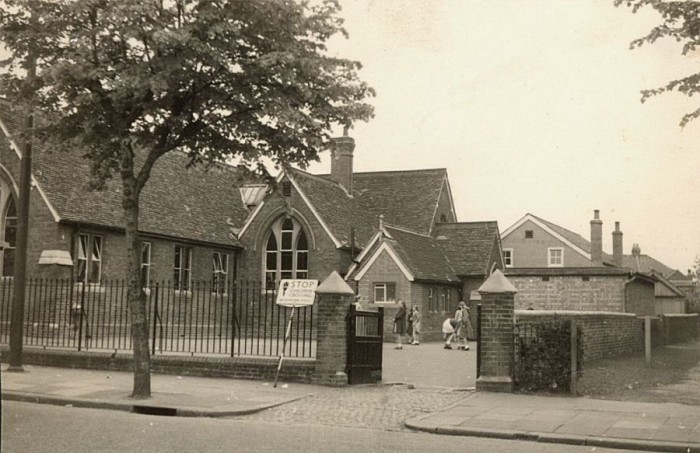 The Tottenham and Edmonton advertiser of December 1859 gives a lengthy account of the opening of the new Sunday school on part of the land given as a site for the church, to accommodate up to 80 children. At the opening ceremony the Vicar of Tottenham expressed the hope,

"that sufficient funds would be raised to make it possible ere long to establish a Day School in the building, and that hundreds of children would live to bless the day that it was in this school they were taught to pray".

1863 - In order to accommodate the increasing number of children, the building was enlarged in 1863 and used as a boys, girls and infants Day School. From 1873, when the School had outgrown its accommodation, it was confined entirely to the teaching of infants.

1872 - On the passing of the Forster Education Act in 1870, it was found necessary to provide further accommodation for increasing numbers, and on 3rd August 1872 the foundation stone of the Senior Schools for 150 boys and 150 girls was laid by Mrs. Pearson of Nightingale Hall, Bounds Green Road. She had already given the site valued at £1,000 (the actual building of the Schools at a cost of £2,000 being met by donations from parishioners who bought the right to elect Governors, and contributions from the Ecclesiastical Commissioners and Diocesan funds).

1886 - The Infants School was again enlarged in 1886 at a cost of £450, the expense being borne by Mr. Robinson, a parishioner living in Stuart Crescent.

1950 - The school saw the founding of the Friends of St Michael's School, to raise money for rebuilding the school. Following many delays, the demolition and rebuilding was allowed to take place in three stages:

During the demolition classes were held in St Michael's Hall next door.

2013 - The school converted to an Academy as one of the founder schools within the LDBS Academy Trust. In doing so retaining its Christian ethos and foundation.